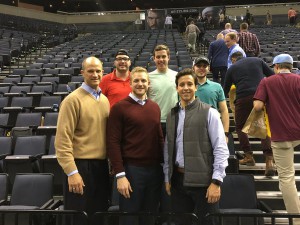 This is the latest artist rendering of the new greek village across from campus.   The PIKE chapter house is shown on the attached PDF.

We have a pretty good group heading to Mizzou on September 5th for the Mizzou vs SEMO football game.   We are purchased a pack of group tickets for $25 each.  If you are interested in going please contact Jason Glenn.   I’m sure we will get a large group head out together. 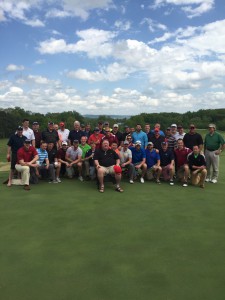 Group Photo of those that played in the Saturday Tournament at Cape Country Club. 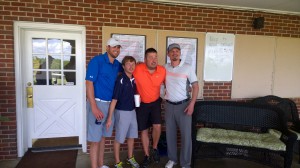 Friday Night Happy Hour
Kellers at the Casino 6:00 PM till ?
Appetizers Provided by EIAA
Mock up of the Universities new Greek
Village will be available to view.

Call to Order:
The meeting was called to order by President Br. E.J. Foreman at 1:20 PM.

Officer Reports:
President:
E. J. began his report by announcing that The Epsilon Iota Alumni Association EIAA had again won the Pi Kappa Alpha “Nester Award” for outstanding alumni associations. A plaque given to the association was shown to the group.

He also discussed the upcoming Alumni Weekend scheduled for April 25th, 2015. He added that we are looking for a Cape Girardeau member to head the committee and do the necessary ground work securing the golf venue as well as other activities and their locations.
He added that unlike last year the association will collect funds for participation.

At this time E.J. turned the floor over to Br. Kyle Vogt of House Corporation to discuss the universities latest effort to build a new Greek Housing complex. Vogt informed the group that SEMO is in the planning stage of building a new complex for fraternities (Sororities would remain in the original Greek Housing complex). This new location would be north of the current Greek town, on the west side of Sprigg Street, next to the Shivelbine house which is currently occupied by another fraternity. These units would have approximately twenty-two to twenty-four beds. The university is asking that the occupying organizations commit to a one lease with a cost of ninety to One hundred and ten thousand dollars, paid prior to ground breaking. There was significant discussion on the topic with the consensus being to remain in K building. The decision is ultimately House Corporation’s.

Treasurer:
Treasure Vann Sontag informed the group that our current balance is $1200. This sum being prior to the expenditures of today’s meeting. A need for fundraising was discussed and a suggestion that we re-birth he “100 BUCK CLUB” as a potential method to generate funds.
Additionally, there is some concern that the alumni association needs to raise at least five thousand dollars to give to House Corporation for monies collected and deposited for previous lounge improvements and assist with future like needs.

New Business:
All new business topics were discussed during the above reports.

Adjournment:
The meeting was adjourned at approximately 2:15 PM at which time brothers returned to the bar area for more social activities.